Domestic V8 overhead-valve engines employ two major camshaft types: flat tappet or roller. Typically chain-driven by a small-diameter crankshaft gear, camshafts operate at half engine speed via another gear twice the diameter, turning one revolution for every two of the crankshaft.

Camshafts determine when the valves open, controlling the amount and duration of their opening and closing in relationship to the moving pistons. These seven terms are commonly used when describing camshafts and how they work: 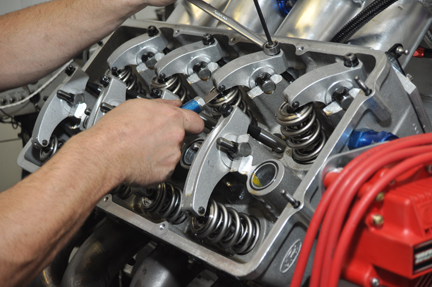 Checking the gap between the valve tip and rocker tip using a feeler gauge, Allen key and wrench.

1. Valve clearance (or lash adjustment) ensures the valves close completely on their seats when the engine is hot or cold. Because most modern engines are constructed from dissimilar metals (cast iron, cast aluminum, steel), as they reach operating temperature their expansion rates differ. Hydraulic tappet systems automatically account for varying expansion rates, but engines with solid flat tappet or solid roller tappet systems require periodic lash adjustment. As the engine warms, the clearance between the rocker tip and the valve tip typically becomes larger. 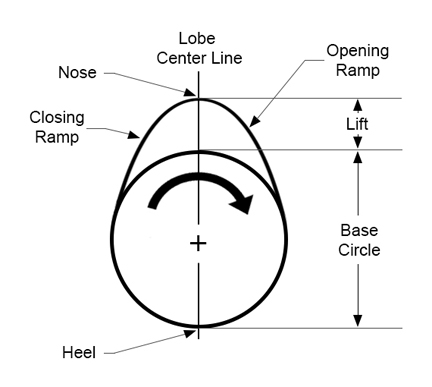 2. Base Circle is the round portion of the camshaft lobe— the portion where the valve is in its closed position and where valve lash adjustments are performed.

3. Lobe ramps are the parts of the camshaft lobe that activate valve opening and closing movements. 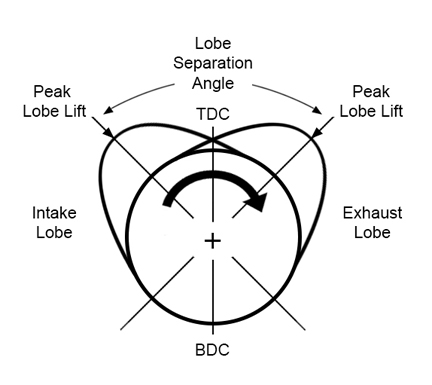 Valve lift is the amount the valve is lifted off its seat, measured in thousandths of an inch.

Lobe lift is the height of the eccentric above the radius of the cam's base circle. On solid roller camshafts, where the base circle merges with the lobe profile on the opening ramp, a microscopic rise is formed. Known as a lash ramp, it closes the gap gently between the rocker and valve tips and, thus, prevents damage. 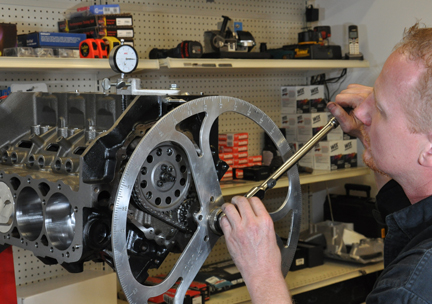 By using a degree wheel, the camshaft is synchronized with the crankshaft.

6. Lobe separation angle is the angle in camshaft degrees between the maximum lift points, or centerlines, of the intake and exhaust lobes. It is typically determined by the engine’s purpose, its displacement and its compression ratio. A 112-degree lobe separation angle means that the peak opening points of the intake and exhaust lobes are 112 degrees apart. This measurement is another way of expressing valve overlap, which is the amount of time that both valves are open on the same cylinder.

A 350cu in oval track racing engine, for example, often runs on a narrow lobe separation angle of 106 degrees. In contrast, a smooth-running high-performance street engine might use a lobe separation angle of 112 to 114 degrees. Five-hundred cubic inch NHRA Pro Stock engines that rev to 11,000rpm operate on 116 degrees and 800-plus cu in Pro Stock Mountain Motors 120 to 122. 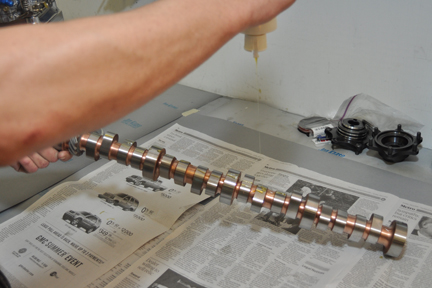 Lubricating the cam lobes and journals before installation.

7. Break In: Lubricating this roller cam is important upon installation, but when installing a solid flat tappet cam, careful break-in procedures are vital. The first 10 minutes of cam break-in are the most critical. If the appropriate instructions and installation procedures aren’t followed, with correct components, failure is likely imminent.

Error while communicating with the server.
Please reload the page, try again.